The first Migrant Quilt was made by Project Amor, a Tucson non-profit organization serving low-income Spanish-speaking families of children with disabilities and literacy needs. The quilt, documenting migrant deaths from October 1, 2003 to September 30, 2004, was made by Project Amor’s staff members along with adults and children receiving services from the organization.  Participants wrote migrants’ names or “Desconocido” on four-inch denim patches cut from blue jeans. Despite the morbidity of their task, they used colorful dimensional fabric pens to write the names and painted often-whimsical motifs on the patches, such as hearts, flowers, stars, rosaries, crosses, hands, and even a drawing of a baseball. They applied ribbons and bows, small pom-poms, rickrack and buttons to some of the squares. Staff members assembled the huge “quilt” by gluing the patches onto a bright red canvas panel, and covered the patches’ raw edges with red braid. At the top, they painted “Tucson Sector” and “2003−2004” and installed grommets to facilitate hanging the quilt. (from Peggy Hazard, “What the Eye Doesn’t See, Doesn’t Move the Heart: Migrant Quilts of Southern Arizona,” in Uncoverings 2016, ed. Lynne Zacek Bassett (Lincoln, NE: American Quilt Study Group, 2016), 14,16.) 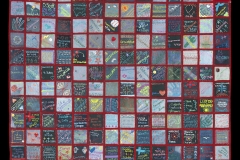 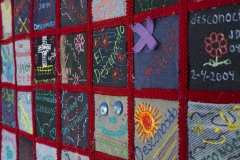 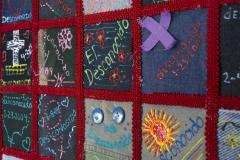