Looking through the stacks of clothing and personal items that were collected in the desert turned the purpose of the quilt project from foreign to familiar.  Handling the very clothing that the migrants wore as they attempted to cross the border made me feel a real connection to them as people rather than numbers.  I was attracted to items that were clearly worn or stained because they had more energy….and I could imagine the person who wore them.

Eventually, my need for cohesiveness within the piece determined which articles I would include in the quilt.  Since there was a large number of blue jeans, that seemed the most appropriate “background”.  I wanted the finished piece to be readable.  I wanted their names to be written in an elegant font because that seemed respectful, so I printed them from my computer onto fabric.  I placed the denim pieces on top of the names, stitched around and cut away the denim fabric to reveal the names underneath.  Both the process and the final visual effect replicates the brutal circumstances of their deaths.

In addition to using the migrants’ jeans, I incorporated three hand-embroidered handkerchiefs. The one with red and pink flowers reads “Duerme amor mio”, which translates “Sleep with angels my love”. “Contigo en la distancia” is embroidered on the other and means “With you from a distance.” The fact that these handmade items were found in the desert makes me certain that the women who had stitched these had lost their loved ones to the harsh desert environment.  I included a baseball cap with our Lady of Guadalupe embroidered on it because it represents the importance of religion in day-to-day life for many of the migrants.

There were 133 bodies found in the Tucson Sector for the time period; only 22 had names. There is a huge thought process while you are making one of these quilts. Sorrow for the families, who have no idea what happened to their loved one and sorrow for the way they died in the desert. (Jennifer Eschedor) 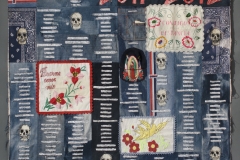 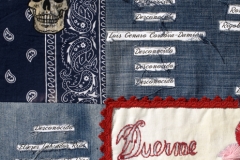 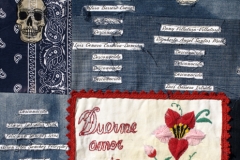 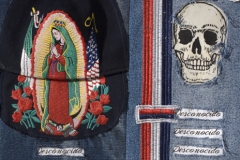 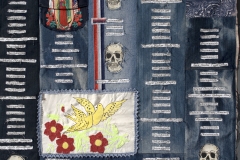 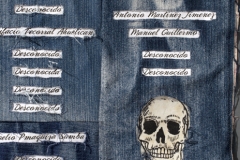